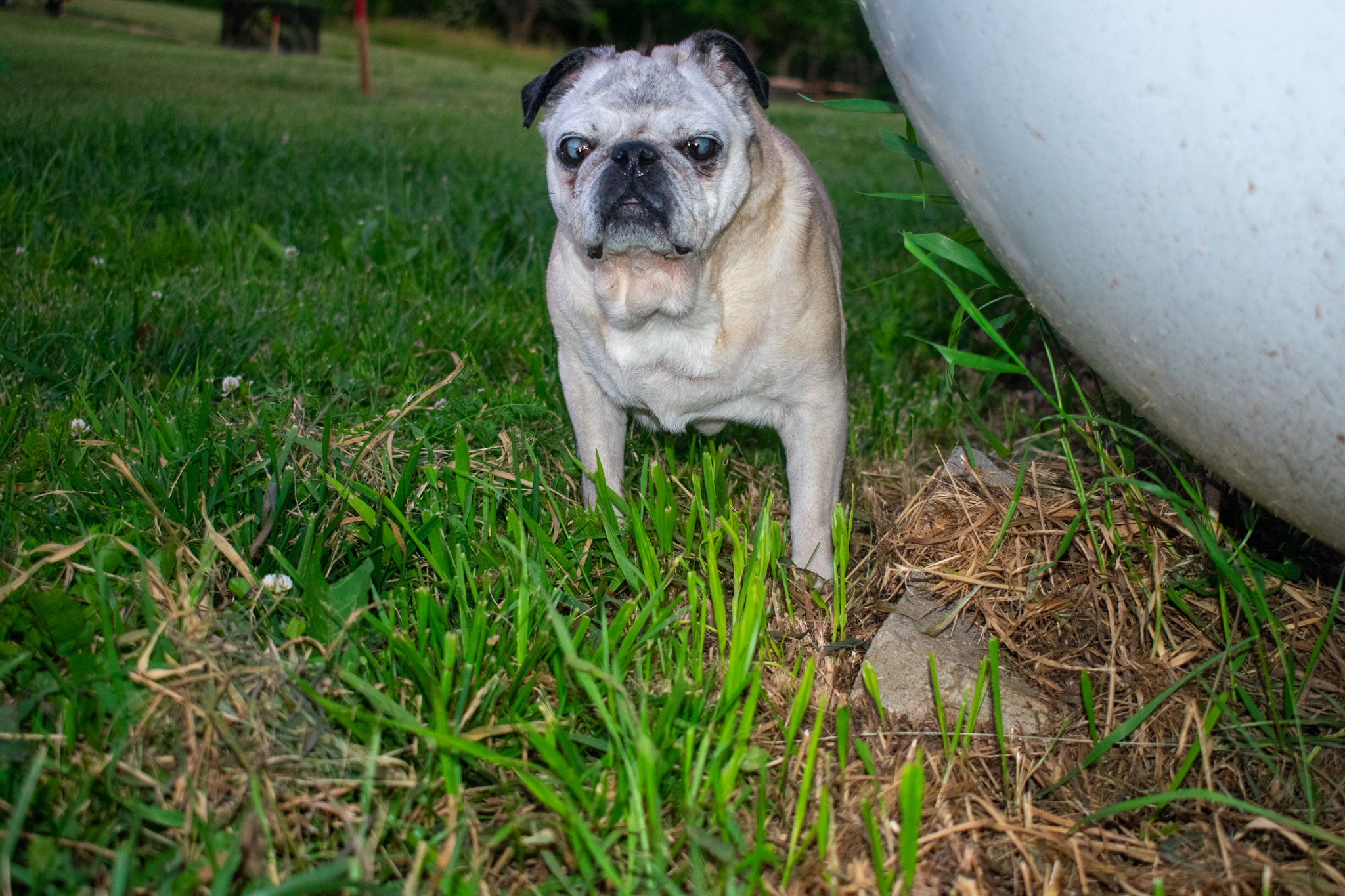 Since we got her, she’s always coughed occasionally. However, a few years ago it became frequent. We took her to the vet, they listened to her cough and listened to her chest, and diagnosed her with collapsing trachea. I’ve written a bit about that in these blog posts if you’d like to check those out:

Trachea collapse and incontinence in pugs

We basically hit a dead-end with trying to find a cough suppressant that worked well for Beans. She doesn’t seem to have pain from the coughing, so we were just letting it be. However, one morning in April we woke up and her cough sounded a lot ‘deeper’ than her normal cough. Almost like her ‘voice’ had changed, literally overnight. Of course, we called for a vet appointment. Because of COVID-19, we weren’t able to go into the vet’s office. They had us stay in the parking lot while someone came out to get Beans, took her in, and then called us to do the appointment over the phone. She said that her cough didn’t concern her that much, but she could hear a wheeze which did concern her, because wheezing is NOT a typical symptom with collapsing trachea, while coughing is. She thought Beans was pretty nervous, but she was panting so hard that her tongue was losing a bit of its color, going a bit gray/blue instead of staying pink…so she was worried about her oxygen level. She said she could her fluid in her chest from a stethoscope, so she typically would like to do a chest x-ray to check on her heart and lungs, but that would require getting Beans to stay in a certain position, which would likely stress her out more, and she didn’t want to stress her out any further when she was already losing color from not breathing well enough. So she explained that fluid in the lungs could be pneumonia, or it could be fluid gathering in the lungs for another reason, and one of the ‘worst’ ones would be some sort of mass or tumor in the chest cavity. She explained that while she couldn’t know what was really going on, that it was safe enough to just treat Beans as if she had pneumonia and if that ‘cures’ the problem, then it likely was just pneumonia, but if not, then she’d like us to try to come back in once we we could come in with her, so she would hopefully be a bit calmer, and then would get a chest x-ray. She also gave us a diuretic medication which she explained would help remove the fluid from Beans lungs, but would likely make her pee a ton. So we went home, we put Beans in diapers, and gave her the antibiotic and diuretic for 10 days or 14 days as prescribed. The diapers were more ‘just in case’ because we knew that if she gets a UTI, she becomes incontinent. However, I’m glad I did, because with the increased urine output, she did become incontinent – and when she peed, it really was a LOT. After just a couple days of medications, Beans cough seemed to improve, as did her wheezing. She had a seizure about day 5. She’s had maybe 10-12 seizures in the time that we’ve had her, so at first I thought this was just her 1-2 yearly seizures. However, she had a second seizure a few days later…and a third a few days later. She’s never had more than two seizures in a short time frame like that. However, her cough was much better after the medications. She was still wheezing, which I was worried about. Honestly, in the back of my head I was really worried that this meant she had a tumor in her chest. However, the “shut down” orders from COVID had not lifted at all, so I wasn’t sure if we should wait to go back to the vet or not..because we still wouldn’t be able to go into the vet’s office.  We decided to try to wait, in hopes that the shut-down order would be lifted. Some aspects of our state (like restaurants) did get permission to reopen, but we hadn’t heard of changes for vets yet. Then we noticed Beans cough was getting really bad again, she was waking us up early in the morning with her coughing fits instead of being able to sleep through the night. We called, and they said they still weren’t allowing people in, but they wanted to see her because wheezing can be an urgent symptom. They didn’t have any regular appointments available, so they told us we could drop her off at 10am, and then they’d kennel her until they had time between the appointments to look her over, and would just call us when they had time. So we did that. She called and said that because we were doing this drop-off style appointment, she could try to get an x-ray, let Beans calm down, then try to get blood work, let her calm down again. I agreed. They were able to do a chest x-ray and two blood draws. They tested her kidney and liver function, checked her red/white blood cells, and took scans of her chest area.

The scan confirmed her collapsing trachea, she said she could see on the scan that her windpipe dramatically narrows at the end. There were no visible masses on the x-ray, from the angles that she was able to get, anyway. What she did see was “whisps” on the scan around her lungs. She said this meant there was inflammation around the lungs. She also had fluid retention in her chest, aka Pulmonary Edema. I asked what she thought was causing this inflammation and fluid retention, and she said she really just can’t know. However, we can just continue to treat it.

So, Beans is back on a diuretic and an antibiotic. We are doing 1/2 the dose of the diuretic as before, in hopes that it won’t cause seizures this time. I’m so relieved that she doesn’t have a mass in her chest, and that the inflammation around her lungs and the fluid in her chest are both treatable.