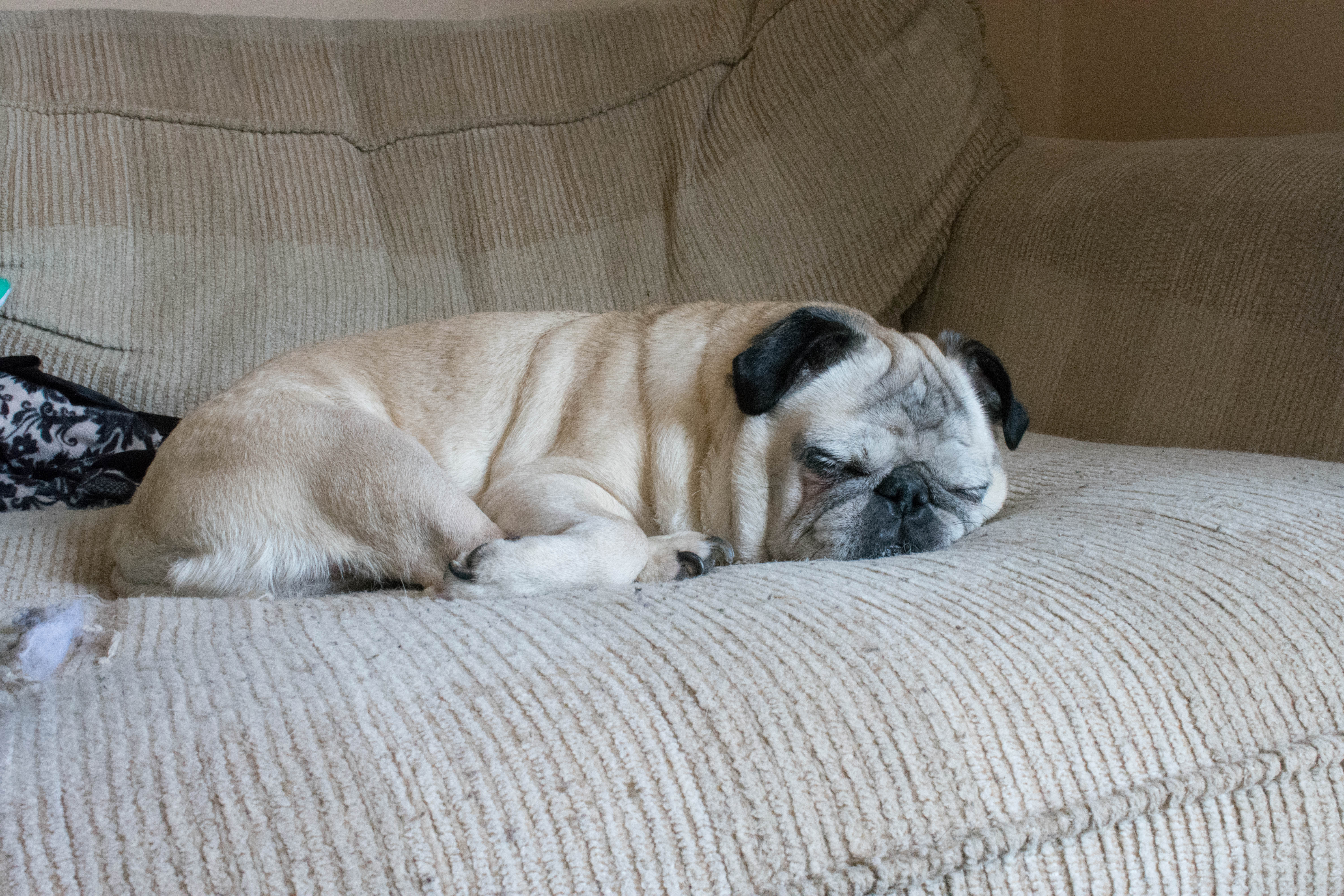 Before we ever got a pug, I had read that trachea collapse is common in pugs. I knew that pugs should wear harnesses instead of collars to avoid pressure in their neck area. We’ve always used harnesses with both of our pugs.

A couple months ago, my pug Beans started choking or gagging a bit while eating her food. We had started a new type of dog food, so I thought it was just the result of the change in kibble size. We bought this slow feed bowl in size small, which forces her to slow down while eating, and was successful at preventing her choking.

Then we realized she was having coughing fits, seemingly at random. So we went to the vet. At first, they just gave us an antibiotic. It didn’t seem to help. He listened to her heart and neck, and said it sounded like the cough was starting in her neck so it was likely collapsed trachea. However, he also had us do a blood test to rule out heartworm. It came back negative, so he decided it was in fact a collapsed trachea. We were given a cough suppressant for dogs, that Beans will take for the rest of her life now. That was about a month ago, and the medication seems to help significantly. She still coughs, but for much shorter spans of time than she was at first. We are still working on finding a balance for how often to give her medication. Some days, just one pill last her all day, and other days she starts coughing a lot in the afternoon so we give her a second. We’ve felt like there may be a connection between her coughing more when it is hotter and/or more humid, but we aren’t certain yet. However, she’s always started panting easily when it’s hot outside, so we will certainly be using the a/c very generously for her once summer hits. We were told that in young dogs, surgery is an option but with Beans being 14 it would be very risky. So, we are just trying to keep her comfortable as much as possible. While collapsed trachea can cause discomfort, from what I have read, it usually does not reduce lifespan which is reassuring. It is more problematic in overweight pugs. I’ve always had a hard time determining if Beans is overweight, because she has a really excessive amount of skin. She feels lighter than Frank, but appears much heavier. He has a defined waist, for example, and she doesn’t. I can grab a full fistful of skin off of her back without it even making her remaining skin taught, and two handfuls off of her neck area. We’ve had some vets say she is only in need of losing 1-2 pounds, and others say she is obese which makes it hard to know who to believe. Our plan is to try her on just a bit less food at each mealtime (adding up to roughly 1/8th of a cup less per day) to try to get her down a pound or two, and then from there see if we think she needs to lose more or not. It’s funny how heavy she appears in some photos (like the tongue one above) compared to others, like the featured image where you see her whole body on the couch.

So far, things seem to be going pretty well. I wish she didn’t have this health issue, but I am thankful that treatment is available to let her stay comfortable and happy. She seems to have as much energy and happiness as she always has. Just a small bump in the road!

If you have a dog with trachea collapse feel free to share your experience, tips or advice in the comments.