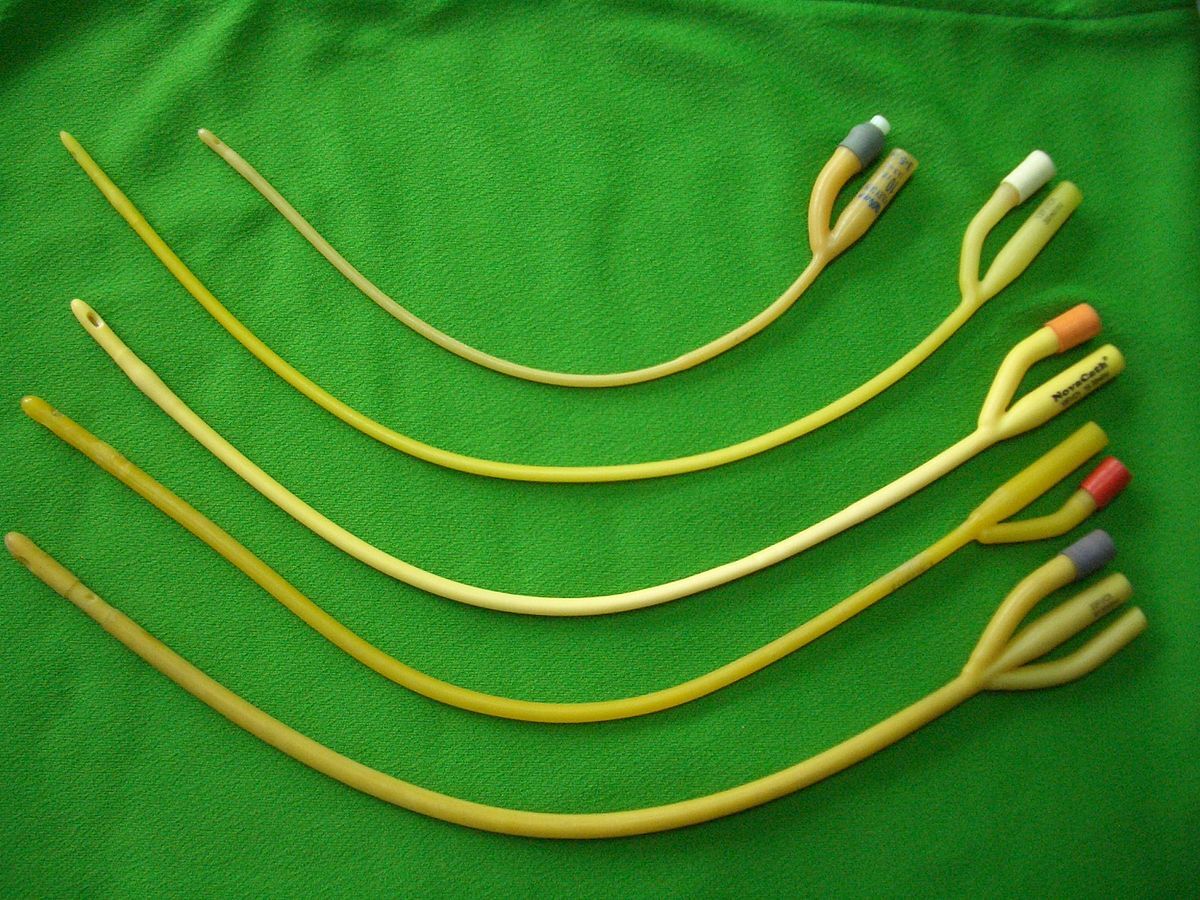 Psst…are you being emailed about this blog post when you’re here to see my posts about the curly girl method, my pugs, or something else? Or maybe you found this post and want to subscribe to just my prostate cancer posts? Visit my blog sidebar to sign up for emails based on various categories that I blog about! Get the content you want, without the content you don’t want. I have a large backlog of prostate cancer-related blog posts to share with you all. It’s hard to find the emotional energy to dive into them a lot of the time, but I’ll catch up eventually. For today, I wanted to just share an experience we had today. Partially to process, and partially to let others know about the urgency needed if a suprapubic catheter completely comes out.

My dad has had a catheter since fall of 2018. In the spring of 2019 he had surgery to switch to a supra-pubic catheter, which basically put a hole very low on his belly, so the catheter comes out the top of his bladder instead of having to stay in his urinary tract. In the almost 2 years that he’s had a catheter, he’s faced a variety of headaches with the catheter, including issues even after switching to the suprapubic. However, things have been going pretty smoothly with it for at least six months now. For a majority of this almost-2 years, my dad’s home nurse/home health aid has done his catheter changes. Today, there was a bump in the road and it was a challenging one.

Yesterday my dad’s home nurse came to switch out his catheter, just because it was time to be switched out. It was replaced without being painful and appeared to go fine. It was replaced around 230pm. My dad went to bed at 930, and prior to going to bed he switches from a leg bag to a night bag. At that time, nothing seemed wrong still.

At 5:30 or so this morning, he woke up for the day and when he stood up out of bed, the catheter completely fell to the ground. The balloon that is supposed to hold the catheter in his bladder had deflated itself somehow.

He woke me up and asked me to call his home nurse. It was too early, I know their shift technically starts at 8. However, I also knew the home nurse lives nearby us and has occasionally stopped here at 7:45, as his first visit. So, I estimated that he should be awake by 7 and waited until 7 to text and explain that the catheter had fallen out and needed replaced if we could be put on his schedule for the day, or if not to let us know as we’d have to figure some other solution. About half an hour later he called me saying he could stop by at 9:30am, which we agreed to.

When the home nurse stopped in to change the catheter, he wasn’t able to get it in. He said it felt like the hole had healed shut.

This really surprised me, it never even occurred to me that it would be possible for the hole to close in just a few hours time. Of course, we don’t know for sure what time it came out. IT could have been as early as 930pm, or as late as 530am. Still, we were only talking about a 12 hour timeframe, max. We initially thought this might mean that he would have to have a second surgery to re-create a hole for his suprapubic catheter. My dad has had a lifelong fear of surgery, so having it done the first time was really difficult, and this was pre-COVID when we could have several family members at the hospital supporting him on surgery day. I’m not certain of our local hospitals policies, but my guess would be that only one person would be able to stay at the hospital with him during the surgery.

However, we called my dad’s urologist’s office and they said we should come in as soon as possible and they’d fit him in without an appointment. They wanted to try to reinsert the catheter themselves just in case they were able to get it. So we took the drive almost an hour away to see his urologist at the main office, a place we’ve only been twice in the past.

The doctor who came into the room was one he had only seen once before, but had a bad/painful experience with. We knew his preferred doctor was there, and he asked for her. They were really generous in allowing us to just wait a few minutes, and then had both doctors work on him at the same time. Given that we didn’t even have an appointment, I was so appreciative of that. While we know the first experience was probably a fluke, there is a lot of mental/emotional comfort that can come from having a doctor who you have a lot of positive experience with.

At first they tried to work some sort of creamy or gel-like liquid into the site, but it didn’t seem to be going in at all. Then they took his regular catheter size and tried to push it in, and agreed with the home nurses experience, which was that it seemed to be fully shut, as it was not budging at all. However, they decided to try to work a wire through, to see if it was 100% sealed or if there was any opening at all. Yes, wire, they literally called it ‘wire’ and it just looked like a wire though I’m sure it was safe for medical use, I can’t deny that it was a bit odd to witness.

They tried to work the wire into the site, and it went through! So then they decided to run a camera scope up his urinary tract, to look at his suprapubic catheter site from the inside of his bladder. It was pretty wild to get to see on a screen what it looks like inside. It basically looks like a belly-button like area on the inside, but you can also see urine and so on. Right in the center of the “bellybutton” looking area, we could see the wire where it had come through. There was a lot of white stuff floating around his bladder, and I asked if that is “sediment” as has caused catheter blockages before and was told “probably”.

They kept the camera on the inside of where the suprapubic site and wire were coming through. They decided to try to work the smallest catheter they had (a “size 8”) through the hole. They were able to work it through without too much discomfort for my dad. They took it out, and tried to insert the next size larger, which also came through pretty easily. So they took that out, and tried to go yet another size larger. That one was rather painful, I held my dad’s hand and he was red and grunting and very obviously in pain – but after a while they got it through. It was almost like they were having to “repierce” a partially closed earring hole, in a sense. Yes, there was a hole there, but it was too tight, so working the catheters through was quite painful. On the scope inside his bladder we could see that it was making it bleed a little each time. They kept doing this with larger and larger catheters to try to get back up to my dad’s regular catheter size, which is an “18”. They managed to get a 14 through, but a 16 was too painful for him to bear. While it only takes a few seconds to write this all out, this was not a quick process, and felt like forever because it was causing my dad so much pain. I would guess they were working different sized catheters in/out for at least 20 minutes. While trying to get the 14 back in, he had started saying things like “I’m just done!” but of course, there was nothing we could do other than work the catheter back in. It was rough. But, they got the 14 back in, and made a game-plan for us for the future.

They want to get him back up to a size 18 catheter, as that will be a lot less likely to block vs this smaller 14 size. However, it was clearly too much to size up that day. So, they are going to leave the 14 in for a regular catheter cycle (Which is 30 days between changes for most people but my dad requires every 3 weeks). Then when it’s time to change the catheter out, they’ll try to size up to a 16 then. Then at the change after that tone, they’ll try to go back up to an 18. All of this is going to be done by the urologist instead of the home-nurse seems how it requires sizing up.

When we left the urologists office I was so socially and emotionally drained, and almost wanted to cry as soon as we got out of there. My dad was physically shaky. I’m so grateful he was able to avoid surgery,but the day was a bit traumatic still.

So, the next few catheter changes will be rough as well. But hopefully within 2-3 months things will be back to normal. He had gone several months without any catheter trouble, which was really nice. Hopefully we’ll get another long stretch of just normal and easy for a while once they get the 18 back in.

I also just want to make sure to let others know that if you ever hear that a loved one had a suprapubic cathether fell out, make sure they know it is potentially very time sensitive! Bodies heal back up faster than you might think. Don’t wait around, get seen ASAP to try to get it replaced.