Senior Pugs – The Difference Between 9 and 14 Years 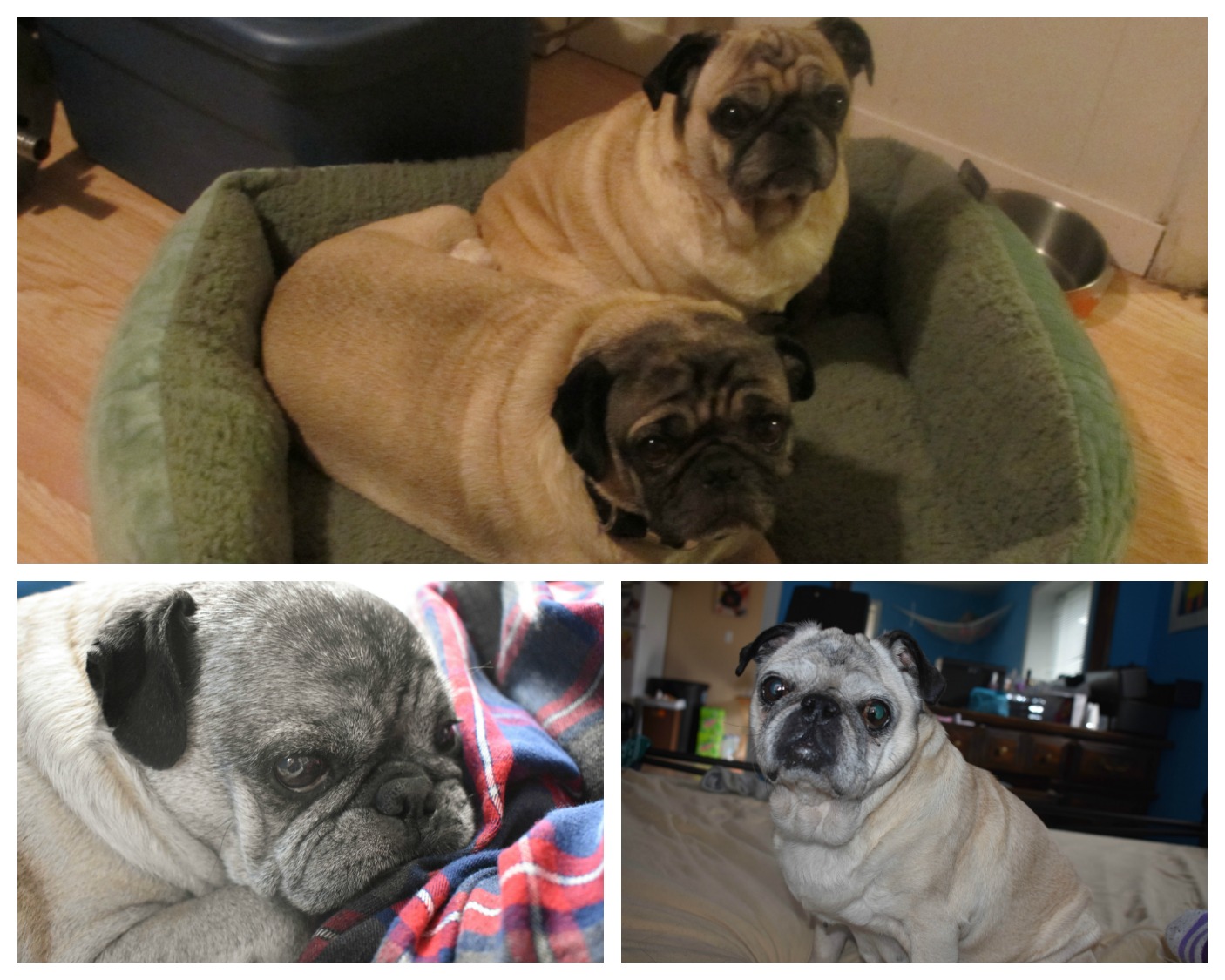 We got Frank and Beans about 4 years and 8 months ago. When we got them, we were told Frank was 8 and Beans was 9. That was in July, we don’t know their birth months. So, by July they will be 13 and 14 years old. I knew when we got them, that age 7 is considered a senior in most breeds of dogs. So, they were already seniors, and now they are just older seniors, of course!

I thought I would share the differences we see in them now as older seniors. When we got them, both were relatively low energy. They would get “cabin fever” in the winter if we didn’t play with them inside enough. Neither has ever been very keen to go on long walks outside on a routine basis. They enjoy exploring in the woods or in new places with new smells, though. They still do!

Overall, I don’t feel like they spend all that much more time lying around, because they mostly just lied around at age 8. However, they do play with us for shorter amounts of time. Beans rarely wants to play for more than 5 minutes, and Frank will go maybe 10 or 15 at most. They used to occasionally play for longer than that. About a year after we got the pugs, they each had a seizure. Since then, Frank has been fine. Beans has had about 3 seizures since then, but they have all still been 6 months or a year apart, so the frequency is roughly steady.

The biggest overall decline that we have seen is in Beans’ mobility. We got a new bed frame about a year and a half ago, and she was never willing to jump up onto it, although Frank was. She is less of a dare devil so we thought that was why. However, just a few months after that, she stopped jumping up onto the couch. We got dog steps for the couch and she took to them right away. Frank ignored them. More recnetly, we got a set of steps for the bed as well, and we were surprised when Frank started using them to come up onto the bed. He still jumps straight down to the floor, but he clearly doesn’t like jumping up onto the bed, as he still refuses to use the steps for the couch. Beans also will not jump up into the car (even though it is very low to the ground). On occasion, she will tip over onto one of her backsides.

They have both slimmed down, due to us monitoring their food intake better. They also have become much more gray in the face.

Their breathing ability seems to be roughly the same. They need an air conditioner before we do, but they have since we got them.

Beans’ vision has gotten worse. I think she sees for roughly 4-6 feet. They both sometimes seem to not hear us, but at other times they hear us surprisingly well, so perhaps it’s just selective hearing.

Otherwise, they seem to be essentially the same. They have slowed down a bit, but I’m thankful to have two tweenage dogs who are both still happy, and pretty healthy too!